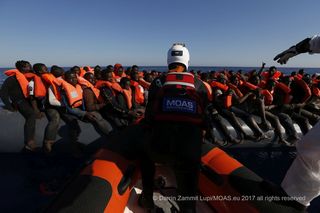 Click here to read the entire rebuttal message from MOAS.
Rescuers have been accused by some Sicilian authorities of taking money from traffickers to fund their efforts. Here is part of the response from MOAS:
"When questioned about why all our disembarkations are carried out in Italy, and not say, Malta or Tunisia, our representatives explained that MOAS is not the decision-maker in this process. The Maritime Rescue Coordination Centre (MRCC) in Rome has assumed de facto responsibility for the coordination of rescue efforts in the area of operations. Therefore, it is MRCC Rome’s role to allocate ports of disembarkation. It is also MRCC Rome’s role to coordinate actions with other national coast guard agencies where needed. We have never approached the Tunisian or Maltese rescue coordination centres first because this is not the accepted protocol as laid out by the MRCC Rome."
Be the first to comment