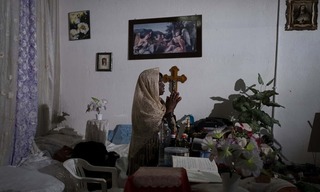 This prophetess unbinds the magic spell: "When they come to Europe and realise they can’t live this life, they come to me and I help free them of this juju forever.”
From The Guardian:
The abuse of religious and cultural belief systems in Nigeria has proved a deadly and effective control mechanism for traffickers involved in the recruitment of women destined for the sex trade in Europe. A hugely profitable and well-organised criminal industry has been operating between Italy and Nigeria for more than two decades but the UN’s International Organisation for Migration says it has seen an almost 600% rise in the number of potential sex trafficking victims arriving in Italy by sea over the past three years.

In 2016 its staff registered more than 11,000 Nigerian women at landing points in Sicily, with more than 80% of them victims of trafficking and destined for a life of forced prostitution on street corners and in brothels across Italy and Europe. Before they left Nigeria, many of them will have been made to undergo traditional oath-taking ceremonies involving complicated and frightening rituals often using the women’s blood, hair and clothing. These rituals – which have become known as the “juju” – bond the woman to her trafficker and to any debts she will incur. The rituals make it clear that failure to pay off those debts will result in terrible things happening to the woman and her family.
Be the first to comment