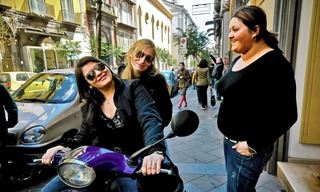 Ladies in Naples. Click here to read the full story.
From The Guardian:
Millions of Italians have been understandably despondent for the past few days. The results of the regional elections in Sicily proved that former prime minister Silvio Berlusconi is back in the big time. With a face that looks more sinister with each passing year, the 81-year-old politician took the credit for a victory in which his rightwing coalition won more than double the votes of the left.

Then, on Monday evening, the Italian football team were dumped out of the World Cup in the qualifying stages, beaten in the playoffs by the humble but hard-working Swedes. For the first time since 1958, the Azzurri – four-time winners – won’t even be at the tournament. “It feels like not being invited to your own birthday party,” said a glum Italian friend.

Football was one of the remaining reasons Italians felt any national pride. With that gone, it seems that their self-esteem has hit rock-bottom. All’italiana has become short-hand for something done badly, with corners cut and, probably, a bit of corruption too. It’s a country, says everyone, allo sfascio – ruined or collapsed. Last month Andrea Camilleri, author of the Inspector Montalbano books, derided that well-worn phrase of national self-approval Italiani, brava gente (Italians – good people): “We Italians are racist,” he said, “why don’t we want to say it? Forget ‘good people’.”
Advertisement

No one would pretend that the country isn’t in a grave crisis: youth unemployment stands at 37.8%, some 11.9% of Italians are living in “extreme poverty”. The national public debt is at 134.7% of GDP (according to EU treaties, it’s supposed to be at 60%). Corruption is endemic and every year the various mafias seem to spread like black ink on blotting paper.
Be the first to comment