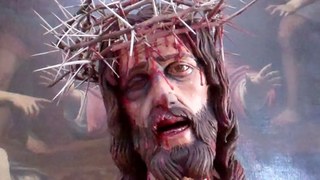 Ecce Homo by M. Guttilla, clay and cloth sculpture.
In Palermo I belong to a cultural non-profit called La Palermo Dei Misteri, or Palermo of Mysteries. A few times a month on Sunday mornings, we have a guided tour on some theme planned and executed by founder Professor Carlo Di Franco, an anthropologist and connoisseur of his city. This morning, Palm Sunday before the Passion of Christ, he led us on a guided tour of all the images of Ecce Homo in the Loggia neighborhood of the historic city center, where I live.
Ecce Homo is a depiction of Christ after he was beaten, whipped and crowned with thorns. Pontius Pilate presented him thus to his accusers, Jews who said he blasphemed by calling himself the King of the Jews, and said, "Ecce homo," Here is a man. The professor says the statement meant that Pontius Pilate had found him innocent of the charge.
In the 1800s, the Palermo city council adopted Ecce Homo as one of the city's 33 heavenly patrons, so then all the churches wanted to have one of the images. Today's tour started with the well-known Ecce Homo in papier mache in a covered shrine outside the Church of San Antonio Abate, near the corner of Via Roma and Corso Vittorio Emanuele, and ended with a display of modern miniature sculptures depicting the Passion of Christ in a deconsecrated church near the sea.
The bruised face of Christ in the picture above, incredibly detailed and expressive, tears flowing from his glassy eyes, beaten, thirsty, hungry and humiliated, knowing what he would soon endure, is less than two inches from hairline to chin. It is modeled of clay by the talented M. Guttilla, a man who appears to be in his twenties, who walked us through the exhibit.
Be the first to comment