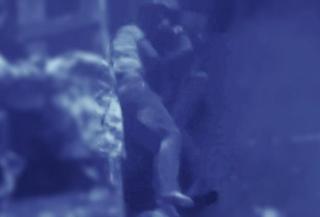 This is a freeze frame from a video taken by Italian Coast Guard rescue and recovery divers of two refugees who died embraced on the floor of the Mediterranean Sea just off the Sicilian island of Lampedusa on Oct. 3, 2013, after the worst tragedy in those seas since 2000. Three hundred sixty-six people drowned together that day.
In this picture, two of them face each in what was left of their embrace. The empty space between them forms a heart. They died this way like the jumpers who held hands and stepped off the burning World Trade Center, frozen forever in the YouTube videos; like the mother in Pompeii who threw herself on her children when Vesuvius erupted in 79 A.D. and remained frozen in stone since then.
This sea-blue image, was published for the first time in La Repubblica's online newspaper on 14 May 2014, the day after a similar shipwreck of political refugees headed to Sicily, the promised land, the gate of Europe, sank 40 miles off the Libyan coast with more than 200 people dead, men, women and children, all on the sea floor, which has become a cemetery of unmarked graves for thousands of refugees.
The shocking image should shame the European Union members into opening their eyes to the consequences of their racist, push-back , borderline laws. "The greatest massacre of our times which Europe pretends not to see," wrote the author of the accompanying text.
1 Comments

Wow! This is incredible. Incredibly sad.