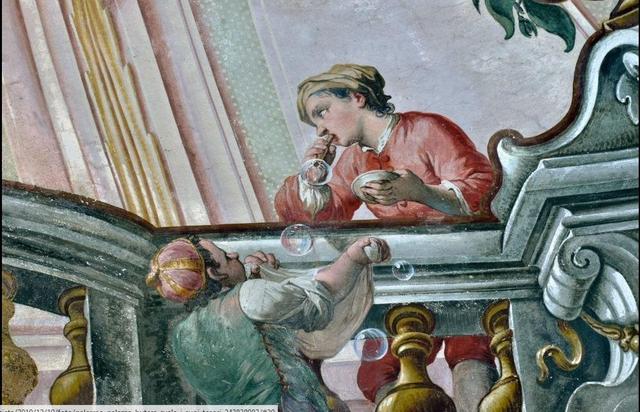 Fresco of boys blowing bubbles inside Palazzo Butera, Palermo. Click here to view a slideshow of the restoration in La Repubblica online.

A few years ago I lived for three months on Corso Vittorio Emmanuele in Palazzo Vannucci, just a couple blocks from the sea and Palazzo Butera, which faces the Mediterranean Sea. At the time, it was still owned and occupied by 20th-century author Giuseppe Lampedusa's adopted son, Gioacchino. In 2016 he sold the family palace to wealthy art collectors Francesca and Massimo Valsecchi. The new owners will turn it into a museum. The second floor is undergoing restoration, but for a short time will be open to a curious public. La Repubblica has an exclusive first view for its readers. The space will be open for guided tours this Sunday from 10 to 2.