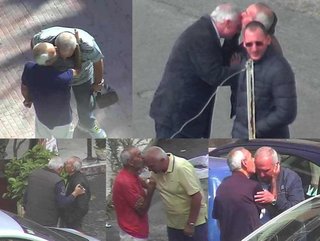 The new boss gets a ritual kiss on the forehead.
Chilling headlines in La Repubblica today.
Through spy cameras and microphones hidden all over the city, Sicilian police learned that the oldest mafia clan in Palermo, of Santa Maria del Gesu` on the city's east side, had just elected a new boss. The brief, intense election season was a sign to police that the  Read More
Be the first to comment