Libera is hiding mothers who turn their backs on mafia 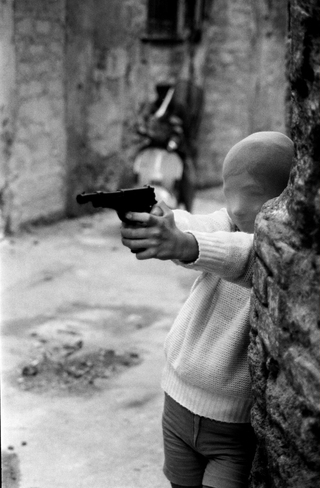 Photo: Letizia Battaglia. Boy plays at assassination near the Church of Santa Chiara, Albergheria, Palerermo 1982
The leader of the anti-mafia group "Libera" (which means "Free") today let it be known that for some time his group has been hiding mothers who want to leave the environment of their mafia families so that their children can grow up free to be anyone they want. It is a grass roots protection program for those who are not collaborating with the state and have the witness protection program to save them. For te women, it means leaving their homeland husbands and extended families. It means creating a new law that allows these children to receive new legal names so that wherever they go, they will be safe in school.
Father Luigi Ciotti, president of the non-profit anti-mafia association Libera, said that "so many women, for the love of their children, have decided to rebel against the mafia reasoning, and the reasoning of their own families, saying 'enough' and asking for help. Many are not collaborating with the law, nor are they trial witnesses but they are asking for a hand. We asked politicians to set up a new legal mechanism to open a third way out, because many women are not capable of collaborating. We have reached an agreement but we need to speed up the process." Read More
Be the first to comment