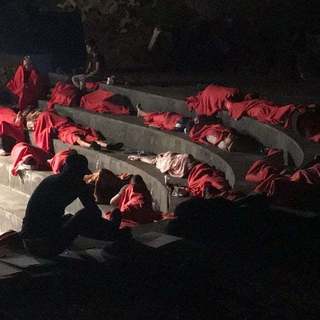 A hundred migrants sleep on the steps of Linosa's amphitheater.
The tiny Pelagic island of Linosa, a hundred miles offshore from Porto Empedocle , Sicily, the sister island of Lampedusa, albeit two hours by ferry from Lampedusa, has barely 300 inhabitants, no hotel and no place to receive the hundred Tunisian migrants escaping Africa who arrived in two boatloads over the past two days. The migrants are mostly adolescent boys but include three women and a 7-year-old child, according to La Repubblica. For the past two nights they have been sleeping in the open on the steps of the tiny island town's amphitheater.
One of the island's three restaurants have guaranteed meals to the newcomers. One tourist from Milan who has a vacation home on Linosa let the migrants use her outdoor shower to wash themselves and their clothes, and loaned them her cell phone so they could call family back in Africa to say they had arrived safely. Water is scarce on Linosa: people collect rainwater in underground cisterns, so this was a real favor.
Linosa has no migrant center. The inhabitants feel abandoned by the state, wondering when someone will come get these immigrants who are spending their days in the street. The town opened up its kindergarten building for the migrants because it is the only structure with a tree for shade. There are no public bathrooms on Linosa, which one woman I know who taught there described as "a cork floating on the ocean."
The only available public bathroom is in the emergency clinic. Confronting the emergency are only the island's three carabinieri (federal military police who added ten more officers overnight) the lady doctors at the emergency health clinic and the traffic cop. Read More
Be the first to comment