Doctors without borders temporarily suspends rescues of migrants at sea 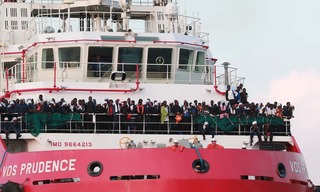 Doctors Without Borders temporarily suspends rescues due to Libyan aggression. Click to read the full story in English.
From the Guardian:
Doctors Without Borders has said that it is temporarily suspending the activity of its rescue ship owing to alleged threats from Libya. The Libyan coastguard has increasingly become more aggressive in patrolling the waters off its coasts where human traffickers launch boats crowded with migrants desperate to reach Europe.

The humanitarian group said the rescue coordination centre operated by Italy’s coastguard had informed it on Friday that the Libyan threats pose a security risk. The group added that Libyan authorities declared their own rescue area, extending into international waters, the same day. Read More
Be the first to comment