Rare visit to the cave graffiti of Addaura in Palermo 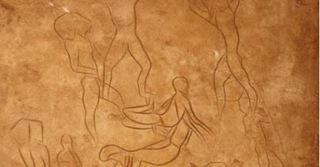 Famous incisions in the rock wall of a cavern at Addaura.
The caption takes you to a cell-phone video of an expert, Dr Vassallo of the superintendency of art and culture, leading a group called Let's Save Addaura on a rare visit to the graffiti of Addaura. The site has been closed for years, but I saw it in person in July 1986, the year I  Read More
Be the first to comment 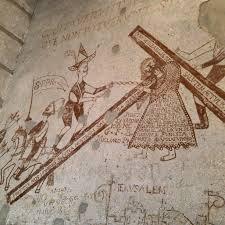 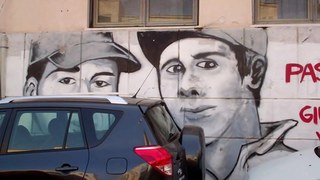 Pasquale and Giuffrida's Memorial Wall
If you die young in Ballaro` someone will immortalize you with a giant mural of your face and maybe a garden, tended like an altar, that no one will defile. Pasquale Ferrara and Giuseppe Giufridda were two youths of Ballaro` and this mural of them was near the Mercato del Usato, the used items market, otherwise  Read More
1 Comments 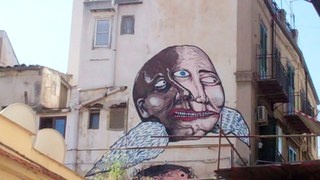 Street art at the entrance to Ballaro` street market.
Call it street art, call it grafitti. I like it. The three eyes are a recurring theme of this anonymous artist.
1 Comments

Odd and wonderful, indeed! Street art is unique. A third eye. I could probably use one. :)