Palermo prays to St Rosalia to save it from coronavirus plague 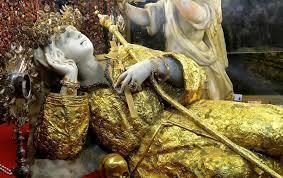 Relics of Santa Rosalia at her cave shrine on Monte Pellegrino, Palermo.

from today's The Guardian.....


Legend has it that in 1625, as a plague swept Palermo and killed dozens of people each day, Saint Rosalia appeared before a man.

Rosalia, a young Sicilian hermit who died 500 years earlier, told him that if the people of Palermo walked in procession while carrying her relics, to be found in a grotto on Monte Pellegrino, then the "evil fever" would disappear.

After months of debate over the authenticity of that apparition, Saint Rosalia's remains – among them a piece of her jaw and three fingers – were paraded through the city at an event attended by thousands of devotees. When the plague began to ebb, she was proclaimed the holy protector of the city.

Four hundred years later, the prayers that Palermitans offer to Saint Rosalia travel in chain messages on WhatsApp. They are asking her for another miracle: free the city of coronavirus, which has killed more than 1,000 people in Italy.

... and then I found this video on the Facebook group, Palermo di una volta. Someone plays a song really loud and all the neighbors, confined to their homes in the San Lorenzo neighborhood of Palermo, come out to their balconies and sing along and dance. MARVELOUS!!! Here is the link: