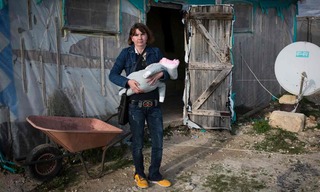 A Romanian immigrant living on a farm in Ragusa province, Sicily.
From The Guardian, 11 March 2017:
Every night for almost three years, Nicoleta Bolos lay awake at night on a dirty mattress in an outhouse in Sicily’s Ragusa province, waiting for the sound of footsteps outside the door. As the hours passed, she braced herself for the door to creak open, for the metallic clunk of a gun being placed on the table by her head and the weight of her employer thudding down on the dirty grey mattress beside her.

The only thing that she feared more than the sound of the farmer’s step outside her door was the threat of losing her job. So she endured night after night of rape and beatings while her husband drank himself into a stupor outside.

“The first time, it was my husband who said I had to do this. That the owner of the greenhouse where we had been given work wanted to sleep with me and if we refused he wouldn’t pay us and would send us off his land,” she says. Read More
Be the first to comment