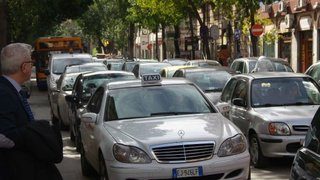 Every Palermo commuter spends 147 hours a year sitting in traffic.
In a year every Palermo commuter spends 147 hours blocked in traffic, according to the TomTom Traffic Index and La Repubblica, which measures traffic flow in 295 cities in 38 countries for all of 2015. Palermo, where buses get stuck behind carriage horses, had the worst traffic snarls in Italy. Second worst traffic city in Italy is Rome.  Read More
Be the first to comment

Tags: 18, adult, gowns, palace, party, expensive, jewels, videographer, catered, candles, glitter, cars, style, over the top, playacting, like grownups, waste
Gabriele Dagostino, the videographer, does a really fine job of photographing and editing, telling the story of each party. Whether or not you like the parties themselves is up to you. Every one is entitled to his or her opinion.
Read More
Be the first to comment

Palermo's got a brand new tram...