Letter to her congressman 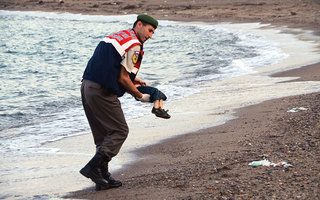 The Syrian boy, now a symbol of all refugees and immigrants
The 85-year-old mother of my friend Naomi wrote this letter to her congressman in support of immigrants seeking new homes, new lives.

I am writing today to make a case as best as I can to reverse the current American paralysis towards the Syrian, Eritrean, Afghanistani refugees as they walk, hide swim, are trunked in cars to escape the seemingly never ending middle Eastern wars.

I speak from experience: I was in the same situation 70 years ago: expelled by the Nazis, my parents tried desperately to get entry into European and American countries – to no avail. By fortuitous circumstances, Shanghai proved to be an open door (nobody had thought to close it) and about 20,000 Polish, German, Austrian, Czech Jews survived the war there .But 13 of my immediate family members who did not choose to escape were gassed, murdered or shot in Vienna and Czechoslovakia.

In the 1930’s I wondered why nobody fought to let us in. Today , I am luckily on the other side
I am a bystander who looks on from afar.

I have seen the triumph of immigrants here . I wont allow the new Trumpifying of them . Right here ,in Carmel, the owner of a cleaning establishment is Korean, the owner of the bagel bakery is Cambodian, another cleaning establishment is owned by a Chinese; a girl behind the desk of my swim club is Salvadorian: we absorb immigrants. They contribute to diversification. They blend in.

So.I cant believe that America built by immigrants , stands idly by when the stream of refugees heading towards Europe is growing ;when there is no end of war in sight. In fact,
America, by not bombing Syrian chemical facilities (Obama’s red line ) has allowed the war to continue.

In the 1970’s at the end of the Vietnamese war we took in 140,000. We should do this again. We should take political leadership – together with the United Nations, together with the Pope – to take immediate action .There is a promise to take in 5 to 7,000 refugees next year according to the NYTimes
(9/6/2015). Not enough.

All it needs is political will and organization. We can fly over there and register thousands and airlift them or put them on boats ; start the process of rehabilitation – first in transit camps which should include language classes & health exams; followed by vocational training with plans to disburse the new arrivals throughout the country. We should encourage Saudi Arabia ,the Gulf States
to do same.We should start a refugee peace corps- give college credits to youngsters who are looking for a cause.

If we turn our backs on this situation, we will be creating more terrorists: and more
significantly, we are turning our backs on our own history.

Please distribute this letter as widely as you can………………

Sincerely,
Lotte Marcus
Read More
Be the first to comment