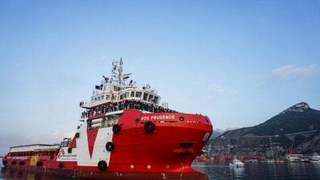 Vos Prudence, a rescue ship. Click to read full story in Italian.
From La Repubblica:
ROME -- After Doctors Without Borders suspended migrant rescues at sea, the German NGO Sea Eye and the NGO Save The Children have also suspended rescues in the Mediterranean Sea. This is because the Libyan government instituted a no go zone "limiting access of NGOs to international waters" and to "securityrisk" owing to threats by the Libyan coast guard."
The German NGO repeats the accusation of Doctors Without Borders: " We find ourselves forced into this decision because of the changed security situationin the Mediterranean," "we can no longer continue our work, we cannot guarantee the safety of the crews," "the expansion of Libya's territorial waters end the threats against NGOs leave us no other choice" one reads in a series of tweets....

Stefano Argenziano, Doctors Without Borders coordinator for migration projects, said, "The Libyans can now do what they want with the support of Europe and Italy. ""We of Doctors Without Borders do not want to be co-opted in this illegal, perverse and inhumane machine. " "The code of conduct is just a distraction, it has no basis in law. The ones respecting the law are us, as we have always done. The illegal things, instead, are the EU's agreements with Libya,which boost the proliferation of traffickers and mafia. Migrant crises are resolved only with the reasonable management of migrant flow. We will again take up our activities at sea only when
the rule of law and international rights return.  Read More
Be the first to comment