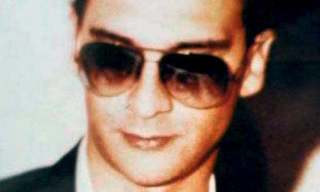 Matteo Messina Denaro, a photo from years ago. He is the top mafioso and he has been on the lam for years. Click here to read the full story in The Guardian.

The Guardian has been keeping a close eye on Sicily these days. (Wind turbines now ruin the spectacular, cinematic views of mountain ridges all over the island.) Here is a story from Today, Tuesday.

A Sicilian windfarm businessman, known as the "king of wind", has been sentenced to nine years in prison for bankrolling the No 1 mafia fugitive, Matteo Messina Denaro.

Vito Nicastri, a former electrician from Alcamo in the province of Trapani, was one of the key funders of Denaro's long spell on the run, a judge in Palermo ruled on Tuesday.

In Sicily, on the hunt for the last mafia fugitive


Read more
In 2013, Nicastri, who was under house arrest, lost his companies, property, cars and boats after anti-mafia investigators ordered the definitive confiscation of his assets worth €1.3bn (£1.1bn).

Among the assets were 43 companies, 98 properties, 66 bank accounts, credit cards, investment funds, cars and boats. Most were located in Sicily and Calabria.

Investigators said Nicastri, who made his name as an alternative energy entrepreneur, had invested money made from criminal activities and had "high-level" contacts in the mafia and "close ties to Matteo Messina Denaro".