So this is Christmas.
Be the first to comment

Brussels to usurp border lines between Schengen countries in emergencies 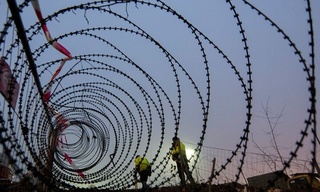 The fence between Slovenia and Austria. Click to read the story in English in The Guardian.
Brussels is to unveil radical plans to strip national governments of authority over their borders in an emergency and to create a border guards force to police the EU’s frontiers, supervise asylum claims, and detain and deport failed asylum seekers.