Taormina G-7 a bust for refugee crisis thanks to Trump 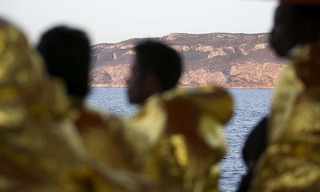 Refugee boats were not permitted to land in Siciy for a week surrounding G7
From The Guardian:
The Taormina summit did not prove to be the diplomatic turning point in the debate on migration that the Italian government had once hoped. The Trump administration squashed an ambitious plan for a positive statement defending the rights of refugees. Possibly the only practical outcome of the summit was that all refugee boats were banned from landing in Sicily for seven days. Taormina residents sent a discreet letter to the local prefecture after the world leaders had left saying they wanted no migrants housed in the town as it might put off the tourists. Read More
Be the first to comment

Taormina
What Trump can expect in Taormina according to the New York Times. Click on the caption to read the whole story in the NYT.
Be the first to comment

Taormina seen from on high. Click here to read the story in The Guardian.
Taormina’s geographical position in the Mediterranean and Sicily’s crucial role in Italy’s approach to migrants is particularly symbolic as the refugee crisis will be one of the topics on this year’s G7 agenda. And indeed, its natural and archeological beauties make it the perfect scene to promote Italy’s image abroad.
Be the first to comment