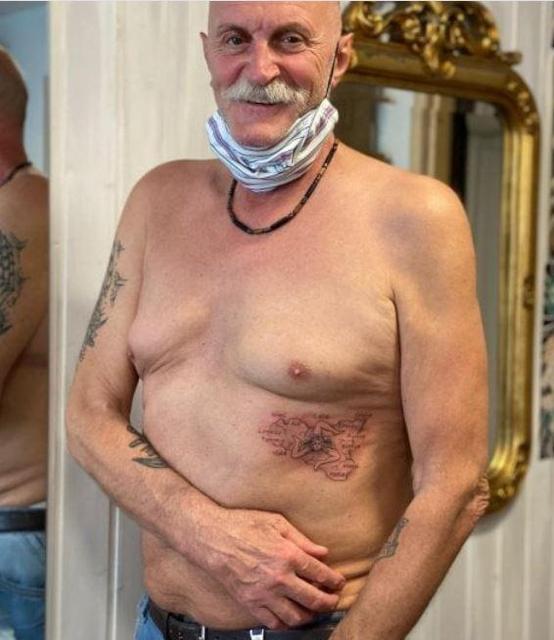 Ettore Consonni, 61, and his new tattoo. Click here to see the photo story in La Repubblica.

"I shall tattoo Sicily on my chest," said this man who had passed out in a Covid coma in Lombardy and woken up in Palermo. Lombardia hospitals were full so Ettore Consonni was airlifted by military plane to Palermo. He kept his promise. He had the tattoo artist draw Sicily and its three-legged symbol, the Trinacria, on his chest, with the names of his children and grandchildren. " I did it to remind me of all the doctors and nurses who took care of me, loved me and saved my life," says Ettore, 61, a retired store owner. He was flown in a coma to the Civico Hospital in Palermo. "In the ICU I heard a Sicilian accent, and I thought it was some Sicilian doctor emigre," he said. "They told me I was in Palermo, but I thought they were joking," he told Giorgio Ruta, a reporter for La Repubblica. After 23 days in intensive care, on 6 April, he started to breathe again without the ventilator. And in that moment he swore to doctors and nurses: "As soon as this is all over I will get a tattoo of your beautiful island." Said and done." In Lombary he found Sicilyagain yesterday in the tattoo shop, where the artist gave him his tattoo for free, because his mother and grandparents are from Sicily.