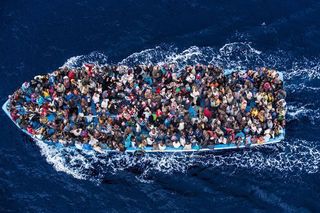 File Photo of immigrants fleeing Africa for Europe
While documentary filmmaker Gianfranco Rosi was celebrating his win in Berlin for his documentary Fuocoammare ( Fire at Sea) about the people of Lampedusa accepting and caring for African immigrants, nearly a thousand more immigrants were arriving on the island's shores.
It was a weekend of life saving at sea off the coast of Libya, according to La Repubblica this morning. 943 migrants were saved, including a baby just a few months old aboard a raft.
On Saturday the ship Cigala Fulgosi rescued a rubber raft carrying 122 migrants and on Sunday also rescued another 236 migrants from craft in trouble. The ship Bettica aided two craft in precarious situations saving 241 migrants including women and children.
If they were Caucasian Syrians, this would have been in the US papers, I do believe. Check the New York Times to see if they thought this was news "fit to print." I just did. It is front page news in Sicily. What does that say about us here?
Be the first to comment