Favorita racetrack closed due to Mafia

Tags: Words or phrases to categorize this post for the tags section 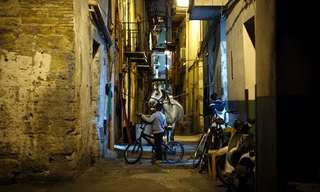 Children care for an urban horse in Ballaro`, in the city center.Photo: Francesco Bellina
From The Guardian:
Horse racing has been suspended at the Palermo racetrack after Italian police investigating mafia activity discovered illegal gambling and evidence that Cosa Nostra bosses were rigging races.

The order, from the head of the Palermo prefecture, Antonella De Miro, followed the arrests earlier in December of 25 people linked to the clans of Resuttana-San Lorenzo that revealed the extent of mafia involvement in horse racing.

“We are in the presence of a system of conditioning and mafia infiltration,” De Miro said. The 15,000-capacity race course, with stables that can host 400 horses, is now empty, with races suspended until further notice and the management company stripped of its tender.

The arrests have revealed the Sicilian mafia to be as involved in on-track racing as it is in illegal street races, where drugged and ill-treated horses are forced to run to exhaustion as thousands of euros are bet on the winners.
Be the first to comment