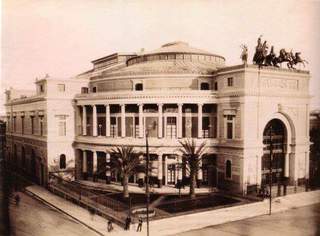 The theater looked so neat and tidy when it was new!
From the Facebook group "Palermo in Bianco e Nero" (Palermo in black and white), a group pf passionate Palermo lovers, many of whom are amateur historians of the city, great connoisseurs of the city. I will translate the first few comments here:

When the palms were still little!
Splendid.
When the theater was brand new!
When Palermitans loved and respected Palermo.
It was designed and built by architect Giuseppe Damiani Almeyda, who also designed the tonnara buildings for the Florios on the island of Favignana, and the finishing touches were put on it in 1891 just in time for the great National Expo to be held that year in Palermo. It is built in a horse shoe shape. Its metal roof was a marvel of engineering for its time. The term "Politeama" designates a theater intended for a mix of entertainment -- dance, opera, orchestra, theater. In 1986 I saw my first opera there, La Traviata, from a nosebleed seat, while the Massimo opera house was still under renovations, ahem, for more than two decades.
Be the first to comment