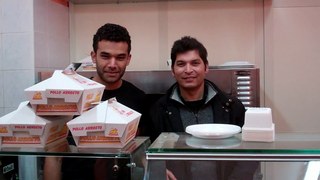 Two guys from Tunisia and Bangladesh serve bi-national fast food.
The largest foreign population of Palermo are the people from Bangladesh. Every time I walk home from the Teatro Massimo neighborhood, down Via Maqueda to the corner of Via Napoli, I pass this one fast food place, Bangla Sonar, that emits the most delicious aromas of spices unknown to me. It's a clean, well-lit place, Hemingway would have said, and the walls are freshly painted salmon pink. Last night I pressed my nose against the window to see what they were selling. One of the two guys behind two food displays flashed me a huge white-toothed smile, the young flower of male beauty, a gem. His hands were busy preparing food but he nodded for me to come in. I floated in. I toured the two displays, and asked if they had anything vegetarian, instead of asking what was inside each golden oval, disk, tube, or puffball. The owner, who was the other guy, suggested this roll-up, and had it heated up for me. The beautiful boy asked me if I wanted ketchup ( they figured out right away I was American). I said no. No also to the yellow sauce that looked like mayo and mustard mixed. But I said yes to the harissa, a hot red sauce. The young guy did not hand me my food over the counter, but brought it to me at the shelf screwed into the wall and I ate right there while he brought me a plastic cup and poured me water from a two-liter bottle. It was delicious, like a spring roll, but with some delicate spice.
The spring roll was Bangla, the harissa sauce was Tunisian. The Bangla guy, Prodam. M. Halim, is the owner and the Tunisian boy is his employee. Half the food on display is Bangla, half the food is Tunisian. The two guys met in Palermo, and because they were both Muslim and both liked to cook, they went into business.
I went back tonight for another spring roll ( I never did ask what the Bangla name for it is) and they smiled when they saw me walk in. They knew I was hooked. I asked for extra harissa sauce and it has cleared up my head cold.
1 Comments

Good food, nice, friendly smile. What could one ask for?