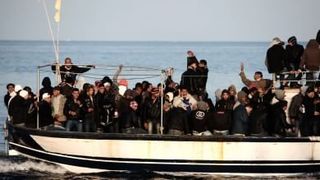 Surviving boat people will arrive Sicily this evening.
At least ten people drown when the rubber raft they were in bounced and flipped. They were escaping Africa. They are not allowed in Europe, and so they travel clandestinely, as best they can, because ironically they must set foot in Europe in order to claim asylum. They cannot ask for help from the shores of Tripoli. They have to make the treacherous sea journey in unfit vessels supplied to them by the human traffickers they have paid with more than their life savings.
This article on the front page of today's La Repubblica states that more than 50 women, one of them pregnant, and thirty children were rescued from an overturned rubber dinghy in the Canale di Sicilia. The ship Dattilo took aboard the bodies of the drowned along with 439 survivors. An oil tanker is bringing another 183 rescued people to Pozzallo, and yet another 319 migrants on another ship will arrive in Porto Empedocle this evening. All told, five rubber rafts and two boatloads full of people were rescued. The migrants came from Syria, Palestine, Tunisia, Libya and sub- Saharan Africa. Sicily absorbs all of them.
Be the first to comment